View basket “Guaiac (Guaiacum resin in alcohol) for Russulas 10mL” has been added to your basket.

Some undissolved material may be present. Shelf life is around 12 months (probably longer but keep well closed to avoid evaporation).

The video below shows a strong positive Guaiac reaction with R.nigricans (dark blue in less than 30 secs).

Some undissolved material will be present.  Guaiac shelf life is around 12 months.

Guaiacum (/ˈɡwaɪ.ə.kəm/), sometimes spelled Guajacum, is a genus of flowering plants in the caltrop family Zygophyllaceae. It contains five species of slow-growing shrubs and trees, reaching a height of approximately 20 m (66 ft) but usually less than half of that. All are native to subtropical and tropical regions of the Americas and are commonly known as lignum-vitae, guayacán (Spanish), or gaïac (French).[5] The genus name originated in Maipurean, the language spoken by the native Taínos of the Bahamas; it was adopted into English in 1533, the first word in that language of American origin.[6]

Members of the genus have a variety of uses, including as lumber, for medicinal purposes, and as ornamentals. The trade of all species of Guaiacum is controlled under CITES Appendix II.

The genus is famous as the supplier of lignum vitae, which is the heartwood of several species in the genus. It is the fourth-hardest variety of wood as measured by the Janka hardness test, requiring a force of 4,500 lbf (20,000 N) to embed a steel ball 0.444 in (1.13 cm) in diameter half that distance into the wood.[10]

A phenolic compound derived from the resin of Guaiacum trees is used in a common test for blood in human stool samples. The presence of heme in the blood causes the formation of a coloured product in the presence of hydrogen peroxide. The effect of peroxidases in horseradish on guiacum was first noted in 1810. 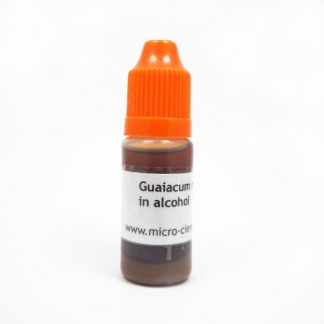