Melzer’s Reagent. An iodine-containing solution widely used for the staining of polysaccarides on spores and hyphae. Especially useful for the visualisation of ornamentation on Russula spores. Supplied in a glass bottle with spatula for accurate application.

Please note: we only deliver this item to the UK and Europe. Orders from the USA and Canada will be cancelled and refunded.

Melzer’s reagent was first described in 1924 by the mycologist Václav Melzer.

Melzer’s reagent – how to use

A simple preparation can be made by adding fungal tissue or spores to a drop of Melzer’s on a microscope slide. One of the following reactions will be seen with the naked eye.

The amyloid reaction, can be further subdivided into:

Observation of spore ornamentation in Russula spores with Melzer’s reagent

Place a drop of reagent on a microscope slide. Scrape a barely visible amount of Russula spores on to the tip of a needle, toothpick or scalpel tip and mix with the reagent. Carefully place a coverslip over the solution, at a slight angle to avoid bubbles getting trapped, and observe at high magnification (x1000) using a biological micrscope. 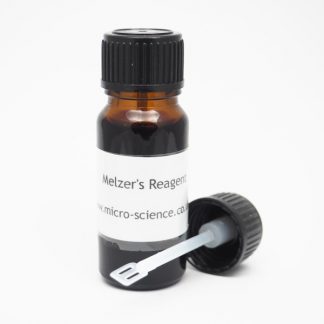